Anything Is Possible Around Hornet

Booger Lights: Anything Is Possible Around Hornet 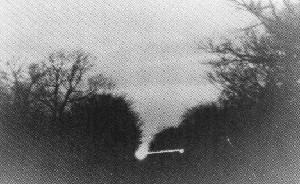 Recently, we took a trip up to Carthage, Missouri on business.  We had to be back early the next morning so we didn’t have much time for loitering, but I couldn’t resist the chance to  head for the Oklahoma line and scout out the South’s most famous ghost light, the Hornet Spooklight.
Sure it wouldn’t seem like much fun to visit a spooklight area in the daytime, but scouting a location before dark is an important part of research.  Topography can fool you at night.  GPS waymarks, altitude readings, and compass bearings done on site are always more accurate than the computer generated version.  Plus, daytime scouting gives a real feel for the lay of the land and helps identify any possible artificial light sources before night fall. 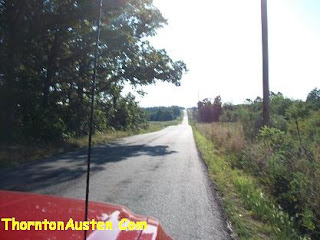 The first thing you notice as you arrive at the Spooklight road is that unlike the old pictures there is a nice layer of blacktop.  Several correspondents have assured me that the new road surface has not effected the appearance of the Hornet light as road work has with other ghost lights.  The ditches are deep.  It would not pay to pull too far off the shoulder here.  While good for drainage, its bad for paranormal tourism.  I doubt Ottawa county cares, anyway.  The people who built the nice new houses along the Devil’s Promenade are reputed to dislike light hunters and hate the nocturnal traffic the Spooklight brings.
Which begs the question.
Why buy property on a public road and then complain about the public?  It’s especially ludicrous since the Spooklight has drawn paranormal thrill seekers for more than a hundred years.  Who would build a house in a known and popular sighting area if they didn’t like the attention the phenomenon brings?  That’s like building next to an elementary school and demanding that the children keep it quiet during recess.
But not all the residents along Spooklight Road are inhospitable. One trotted right up to us as we took readings and pictures near the site of Spooky Middleton’s old museum. 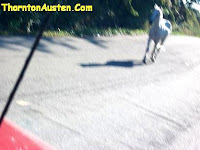 He Bit a big chunk out of the plants Mrs. Austen had just bought on sale at Home Repo in Joplin, gave us a nod, and headed toward home. 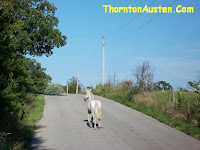 We had little time to visit and unfortunately couldn’t wait for dark.  On the way back to the main drag toward Fayetteville, we saw something that caused us to back up and snatch a few more pictures.  It just may be me, but in South Arkansas we just don’t have that many submarines, especially submarines mounted on poles. 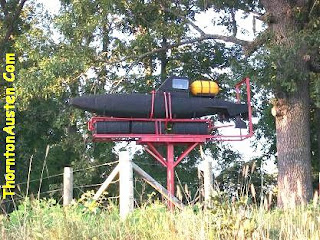 Due to all the bullet holes, I’m sure it will submerge.  Surfacing is the question.  You can see just about anything around Hornet.  And it gets stranger after dark.
We shall return. Posted by Unknown at 7:08 PM No comments:


Positioned astride a long sweeping curve in the Illinois-Central Gulf Railroad, the town of Beauregard in Copiah County, Mississippi is no stranger to terror and tragedy.  On March 3, 1966 a tornado ripped through the area and killed fifty-eight people.  Even earlier in the town’s history, on the afternoon of Sunday April 22, 1883, an F-3 tornado swept along a 55-mile track through the town and almost wiped Beauregard clean.
More than a hundred people were injured in that twister.  The storm destroyed more than forty homes and businesses.  Only three houses escaped major damage.  Fortunately, one house that survived was a three-story home on the edge of town belonging to Dr. Elias A. Rowan.  Like most country doctor’s homes in those days, Dr. Rowan’s house also served as the hospital for the community.  He took in the bulk of the injured.  Despite Dr. Rowan’s tireless efforts to lessen the victims suffering, eleven still died from the Beauregard tornado of 1883.
The town’s residents never forgot Dr. Rowan’s efforts.  He remained respected as a member of the community, not only as town doctor, but for his work with the church and charity.  Dr. Rowan lived an active life and continued his practice long after most would have retired.
One night in 1912, an elderly Dr. Rowan ventured across the Illinois-Central tracks toward the Beauregard Station to meet a patient returning from a procedure done at a large city hospital.  The doctor didn’t notice the approaching train until it was too late.  The engineer saw the frantically waving lantern, but could do little to stop in time.  Beauregard lost its best-loved citizen to dismemberment below the oncoming train’s screeching wheels.  Dr. Rowan’s death became just one more tragedy to befall a seemingly cursed town.
Though respected and loved for all his days, it appears Dr. Rowan failed to find rest in the afterlife.  The old house beside the tracks soon gained a reputation for paranormal activity.  Reports of strange sounds, unexplained lights, and ghostly apparitions centered on Dr. Rowan’s house kept the townspeople away.  For many years, the house remained much as its owner left it and no one went inside to plunder Dr. Rowan’s belongings or investigate the baffling occurrences.  Thus, it was no surprise to locals when train crews first reported the mysterious light on the tracks.


It was in 1926 that a train first braked to a stop for someone frantically waving a lantern in Beauregard and upon investigation found no one there.  When the train reached McComb, the crew reported the incident to the yard boss, who laughed it off.  The same thing happened the next night.  The light soon became a regular occurrence and the town of Beauregard became known as “Flag Stop” among local railroaders.
The yard boss kept careful records of the stoppages at Beauregard, but feared the ridicule of his superiors.  It was some time before he reported the incidents.  When he finally took his logbooks in there was no laughter.  The railroad assumed the light was an act of sabotage perpetrated by union agitators.  They immediately called in railroad detectives to investigate.
The detectives did a thorough investigation and questioned everyone who had witnessed the light.  Before long, the investigators had an exact location pinpointed and began a stakeout.  Their target was a stretch of tracks where the light always appeared.  It happened to be adjacent to Dr. Rowan’s abandoned house.  Finding no other possible source for the light, they concluded Dr. Rowan’s ghost was responsible for the incidents.  The case was closed.
Trains continued to stop for the phantom lantern of Beauregard for many years afterward.  The railroad lived with the nuisance.  Eventually, light activity dwindled after new landowners demolished Dr. Rowan’s house in the late 1940’s.  However, there are still reports of an occasional sighting of Dr. Rowan’s lantern near the site of his old home on the south edge of town.
Today, little remains of the town of Beauregard.  Economics has accomplished what Mother Nature failed to destroy.  To get there off I-55 north of Brookhaven take Wesson exit 51.  The remains of Beauregard lie on US Highway 51.  Freight and passenger trains still use the tracks and travel at high speeds around the blind curve in town.  I strongly urge light hunters to stay off the tracks as a train can come on them unexpectedly just as it surprised Dr. Rowan.  No one wants you to add your ghost to the Illinois-Central legend.

Posted by Unknown at 7:10 PM No comments:

As I have said before on this blog, this is my favorite time of the year.  It’s usually cool enough that the mosquitoes have retreated and kids all get to dress up and do their thing.  You get to see all the pretty colored leaves.  Not to mention, squirrel season is in and deer season is just around the corner.

It’s hard to post one of my short stories on the blog.  Most average around 3,000 words.  That makes for a long column.  This year I will make an exception to the rule.  A while back I toyed some with flash fiction.  As a former copy writer I’m used to packing the most wallop into the shortest possible space.  Rules dictated that the following tale is a mere 99 words, not counting the title.  It won the Saturday Fiction Writers’ Award a couple of years back and MicroHorror subsequently published it.  I hope you enjoy fiction done fast.


LOVE AND THE INNER BEAST

I never smelled a girl like her in Safeway.  She pushed a buggy down the cereal aisle and turned her cheek to hide the striped claw mark that makeup couldn’t.  I knew the lacy blouse hid more scars like the crescent on my cheek a pup gave me as a child.
As I sacked her groceries, my heart sank –-
Cat food.
Large brown eyes showed the felines were just a snack.
“Beautiful moon tonight,” I said, “Feel like a howl?”
Her pupils narrowed to slits.  She smiled as her nostrils tasted me.
“Sure.”
Finally.  My kind of girl.