Booger Lights: Bailey’s Prairie, Brazoria County, Texas
It doesn’t pay to deny a man’s dying request.  In Texas, that goes double.  In fact, neglecting your funeral obligations can haunt you and your descendants for generations.
James Britton “Brit” Bailey liked to boast that from his 1779 birth in North Carolina, he’d always moved westward.  He also had a talent for getting what he wanted.  Bailey lived a colorful life of the kind that keeps early Texas history interesting.  A former Kentucky legislator and War of 1812 veteran, Bailey moved his family onto a Spanish land grant near the Brazos River.  Bailey built the first house in the area and he painted it bright red so it could be seen for miles across the prairie.  The Red House not only served as a landmark for travelers, but as an advertisement for Bailey’s trading post.  He enjoyed good relations with the Spanish and the Indians, even the cannibalistic Karankawa tribe.
Though Brit Bailey was there years before the establishment of the Austin colony, he is considered one of the “Original 300” colonists.  After Mexico gained its independence from Spain, the new government disregarded Bailey’s grant and awarded his lands to Stephen F. Austin as Impresario of the new colony.  It was a slight that would plague Austin for years, since the wild and eccentric Bailey clan had no intention of following Austin’s order to vacate their property to the new-comers.
Only after a legendary fistfight in the streets of Brazoria did Austin relent and grant Brit Bailey his original league (4,428 acres) on the prairie that still bears his name.

Still, relations remained tense between the two men.  Because Bailey was a skilled fighter and a fair trader, he kept the respect of the Comanche and Karankawa.  Austin harbored suspicions against Bailey since his family remained unscathed while other settlers routinely lost their scalps in the constant Indian raids that plagued the colony.  That charmed existence ended in June 1824.
A band of Karankawa warriors came to Bailey’s store at the Red House and demanded he sell them arms and ammunition.  Bailey refused.  A tense confrontation ended with the Karankawa retreating from Bailey’s fierce temper.  Since they couldn’t buy weapons, the Karankawa raided the other colonists homesteads to get guns.
The next morning, as smoke still rose from a good portion of the Austin colony, the Bailey family joined with other settlers and ambushed the Karankawa at Jones Creek.  Bailey’s son Phelps died in the fierce battle.  The death of Bailey’s son and the other settlers began a ruthless vendetta that ended only with the near extinction of the Karankawa tribe before another wave of settlers arrived the next spring.
Like most of the Texans, Bailey remained a loyal citizen of Mexico as long as the government honored the Constitution of 1824.  He took his oath to defend the constitution seriously as a captain in the 3rd Militia Battalion.  It was only after Presidente Santa Anna imprisoned Austin and broke his agreements with the settlers that Bailey and others took up arms at the Battle of Velasco in 1832.
After Velasco, Bailey finally relented to his daughters’ wishes and built a home in town at Brazoria.  Just before he finished the house, Bailey was stricken in the cholera epidemic of 1833.  Before he died, Bailey left specific instructions for the disposition of his remains.  He would have no man say, “Here lies old Brit Bailey.”  Furthermore, since he had never looked up to any man in life, he sure wasn’t going to do so in death.
They would bury Brit Bailey standing up.  He would face West, since that was the direction he had traveled since birth.  He would be armed with his favorite brace of pistols and have his rifle ready in his hands.  Lastly, and much to Mrs. Bailey’s exasperation, Brit would have a jug of whiskey place at his feet.  According to his manservant Uncle Bubba, he followed Brit’s wishes to the letter, or so everyone thought.
Within the month, Mrs. Bailey abruptly moved into the unfinished Brazoria house.  She never returned to the Bailey’s Prairie and soon sold the Red House.  The new owners soon realized they were not alone in the Red House.  Several nights they awoke to see a shadowy figure at the foot of their bed.  The silent, but unwelcome guest gestured wildly and seemed to want something.  In fact, the figure appeared most insistent about its unknown demand.  The Red House changed hands among new settlers several times in rapid succession before Uncle Bubba revealed the truth about Brit’s missing jug.
Uncle Bubba claimed that Mrs. Bailey removed the jug.  She claimed he had imbibed plenty enough whiskey in life to serve him through the hereafter.  Her last minute decision would have repercussions that have echoed for almost two hundred years.  Someone must have placated Bailey’s thirst because the shadowy visits subsided—
For a time.
Colonel Munson, a friend of Brit’s, first noticed it the 1850’s.  Brit Bailey supposedly had risen from the grave.  He appeared as a large ball of flame, spooking cattle and humans alike.  Perhaps he searches for a fresh jug of whiskey.  Perhaps he just rises to wander the beloved prairie that bears his name.  The light also seemed disposed to chase those people who ran from it.  While there is no record of it harming anyone, there are several stories of Bailey’s light causing fearful people to hurt themselves.
Over time residents recognized a pattern to the Brit Bailey’s visits.  His ghostly light came back every seventh year.  The light would appear infrequently during that year.  Then, it went away. 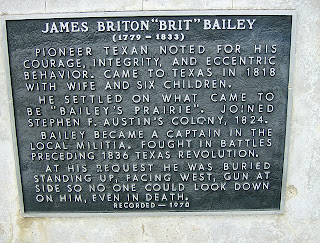 In the 1930’s, newspapers reported a reddish orange orb of basketball size arose from the earth near the huge live oak that marked Bailey’s gravesite.  The light zigzagged through the sparse trees.  People tried to chase the light on horse back and in vehicles, but the light easily eluded them.
Over the years, locals have grown used to Bailey’s light.  Although in recent visits the light has had a habit of crossing highways, has caused traffic accidents, and was once blamed for igniting a gas well.  Brit Bailey’s ghost light is a welcome reminder of Texas’s colorful past.  People look forward to its reappearance.  Hopefully, recent development of the prairie will not cause the disappearance of Bailey’s Light, as it has ghost lights in other areas.
Follow Farm Road 521 about 1.4 miles south of its intersection with Texas Highway 35 between Angleton and West Columbia.  Bailey’s grave is located near the southwest edge of Flag Pond on Bennett’s Ridge.  A huge live oak tree once marked the grave, but it is reported that that tree has died.
If he keeps to schedule, Brit Bailey’s Light should return in 2013, 2020, and 2027.